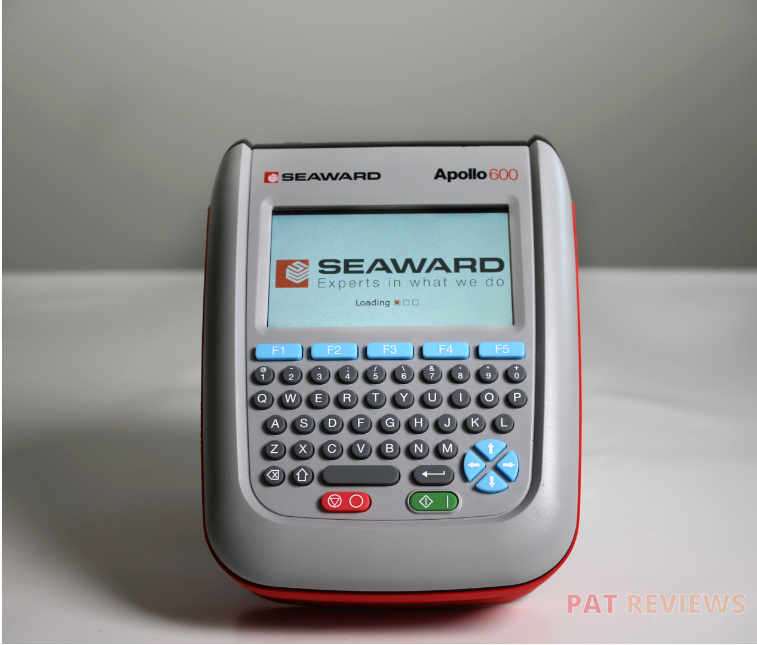 Today we are looking at the top of the range Seaward Pat the Prime Test Elite – Plus, which is a derivative of the Seaward Apollo 600 Pat, being as its easier to write Apollo 600 we’ll mostly refer to it as that today, this sits in the $3000 – 4000 bracket.

A little background as usual, Seaward as a company has focused on Pat Testers for decades and there products generally show innovation and the finished product tends to work very well.
As with every manufacturer things tend to follow on from previous models that have worked hence the old adage ‘ if it ain’t broken don’t fix it’ however sometimes a relook may be a better investment than new gimmicks let’s see.

That said this Pat comes in a small handheld case fitted with a permanent rubber bumper, a full qwerty keypad sits below its large screen, its light and definitely looks the part!

When you turn on the Apollo the screen lights up quickly to show a nice clear full color screen that adds to its modern design looks, then things become interesting, if you tap the screen you struggle to see why its not at all responsive … until it clicks … its not a touch screen!

OK that’s fine but in the days of everything being touch it seems odd if not initially a little confusing, kind of like car indicators on the wrong side!
That said the Apollo is an interesting little Pat, it has a lot of administrative features which can also enable users to set preferred options in test mode ie what to do when an item fails and the like it also has a full onboard manual, most of its operation however just seems to be in the Seaward Grove of things, a camera may have merit but weigh that against the fact that most if not all users have a camera already its merit is debateable.

The tried and proven operator type settings novice and advanced remain as well as an addition that is called privilege which allows otherwise restricted access.

All test settings are editable and renameable by someone so the integrity of results will always have a question mark over them, dissapointinly this is mostly the norm on Pat’s.

If you’re familiar with any other advanced Seaward Pat you’ll easily navigate and operate the Pat without too much trouble as it is mostly intuitive.
Why Seaward still carries on having data entered before testing always intrigues us, we thought this Pat may have bought a change but the status quo remains.

This Pat can store 50000 records on board download/upload options are numerous and Bluetooth scanners and printers are available, the print system is very basic and hasn’t really had any new additions, this is disappointing as Tags are a necessary part of Test and TAG !

There appears to be little if any new safety features eg failed tags continue as with other models sometimes adding confusion to the safety status of the appliance due to the similarity of the pass and fail tags.
Before we move on to the tests we do wish to say we like that its pretty, small, compact and functional.

Now to the Tests

Protective Earth test This unit does what the manufacturer calls in the manual an ‘earth continuity test’, disappointingly it cannot perform an Earth bond test at even 10 Amps.

Insulation Resistance test This can be done at 250 or 500Volts

Lead test Again pretty standard – but we can’t seem to test a lead with an RCD in line as the Polarity test causes a fail.

RCD TEST As stated above there seems no way to do a polarity test on a lead with a rewireable RCD fitted ( required under ASNZS3760 ) other than that the RCD function works while being quite basic.

As standard with most Pat’s in its class it has the ability to test 3 phase appliances, however the Seaward optional is a rather expensive accessory.

Probably its best feature is its asthetic appeal and size and the nice color screen even if its non touch !
We do have to wonder how many users have had one slide out of there hands resulting in a gravitational pulling force entering the scene with many broken pieces scattered around !

Q Does it enable the testing person to comply with ASNZS 3760 ?
A Mostly or fully if you remove RCD testing from the equation.

Q Value for money?
A looks aside its not that great, we’d say average and thats probably a little generous!

Others you might also want to look at would be the Megger Pat 420, the metroiPat or the Trio safety check, they are all bigger and honestly don’t look as pretty, but then your not marrying it, except in today’s world I’m sure that will be possible soon too !