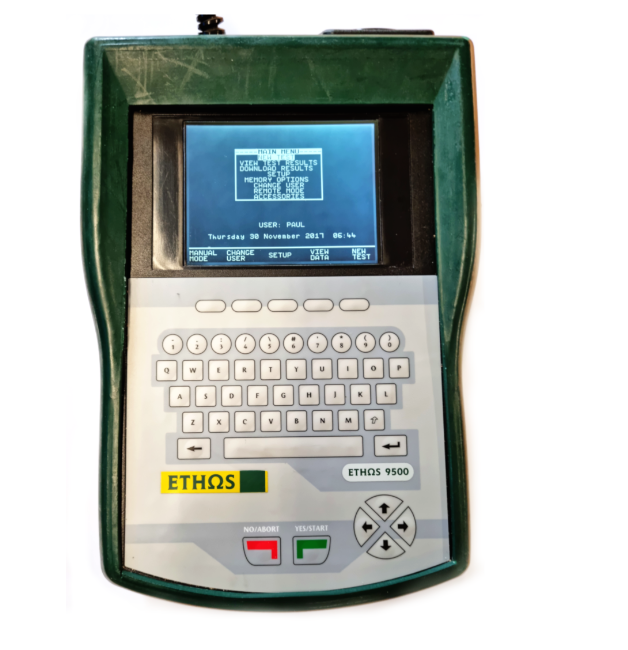 Today we are looking at another older tester the Seaward Europa +
First, a little background history, the Europa + was the replacement for the Europa, the main difference between the two is the Europa Pat had an alphanumerical keypad where as the Europa + has a full qwerty keypad both are of the membrane type.
Both the Europa and the Europa + operate nearly identically when you discount the two different keypads.
Both also share a lot of DNA with the Seaward SuperNova series of Pat’s

The Europa+ is a compact advanced Pat tester that performed we’ll when it was introduced to the market, it didn’t appear in Australia on the market as early as it could of due to the success of the non plus version.
The case of the Europa + is a hard plastic which isn’t very robust but Seaward added a large and solid rubber bumper to the Pat, this makes it much more robust.

The Europa+ today almost 20 years on is still a very capable tester, it works along the same lines as most of Seawards more recent Pat’s right and left arrow keys as well as up and down arrow keys centered around a circle operate drop down boxes, as well as this there are the function keys situated below the large LCD screen.

The Pat can work in various modes with settings being changeable by the user on all occasions providing things aren’t password protected. This doesn’t have to be a problem but could be, that said we only know of one Pat where it can be operated in a totally secure manner that guarantees the integrity of results.

Accessory sockets are not as clearly marked as they could be but mistakes should be obvious as earth tests will all fail if wander lead is not plugged into the right socket.
Battery operation is not possible nor can it perform RCD testing

Well let’s see what tests can be done

Protective Earth testing
This is able to be performed at either 200 milliamps , 10 or 25 Amps

Insulation Resistance test
This can be performed at both 250 and 500 Volts.

This does all the necessary leakage tests including touch and differential leakage testing.

Lead test
Leads are very simply tested and simply plug into an accessory lead that plugs into the Pat iec socket.

This Pat can store 5000 results in its onboard memory as well results can be downloaded, results can be directly printed onto tough tags direct from a label printer and it can also have data entry via a linear bar code scanner.
Information is put into the Pat before tests are performed rather than afterwards, whilst this is standard for all Seaward Pats it can be a time waster.
Overall this Pat is adequate when it comes to functionality but for an advanced Pat it is showing its age.

Q Does it enable the testing person to comply with the requirements of ASNZS 3760?
A Yes providing RCDs are not needing to be tested.

Q Value for money?
A When originally introduced it was one of the best value Pat’s on the market for serious Pat testing, today it’s aged and is not a particularly nice tester to fix, if it’s done a lot of work it will almost certainly be high maintenance unless you know the history of the particular tester we would suggest avoiding it.

We hope this review has been helpful.