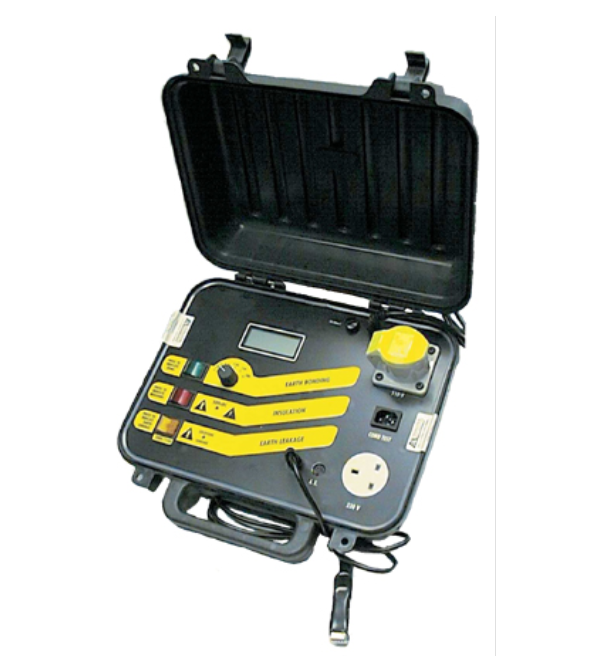 Today we are starting a review of some of the testers that are out of production but still very commonly in use.
If your looking for a second hand Pat read on first up will be the metroPat 200/220

A little background these were produced by Metrotest instruments hence the name metroPat production was from the mid 1990s to mid 2000s.
A basic functional Pat where results needed to be interpreted by the user, results being displayed in a large easy to read format on a LCD display.

There are as shown above were two different models the 200 and the 220 the later had the ability to do a substitute leakage test otherwise they were identical, early models were yellow while later where black all came in a tough ABS plastic type case with removable lid.

Controls were very simple a rocker switch next to the labeled test function on the front screen, these switches could be operated in any order though they were displayed in a logical manner from a safety point thereby giving guidance to the less skilled.
The only other control was the rotary switch which switched the test current for the protective earth test.

All the metroPat 200/220s could perform an earth bond test with test currents ranging from 4.5 amps to 20 amps at various preset values, they could also perform an earth continuity test at 100milliamps via a separate test lead.
There was no ability for accessories such as printers nor did any have an onboard memory.
Battery operation was also not possible.

Now let’s just go through the normal test functions
Earth bond and earth continuity tests were both possible with test currents ranging from 100 milliamps to 20 amps.

Now onto the Insulation Resistance test, this was performed at 500volts only, this may sound strange but back in the production period there was little calls for different test voltages.

Leakage testing was not possible accept as a substitute leakage test, the substitute test voltage was 40 volts.

Lead testing was performed by plugging in an adaptor lead as is the norm today.

Other functions were not available on either models.

Summing up this tester, twenty years ago it was probably quite a good little tester when compared to many others, even today it does something many popular testers don’t do still that being a protective earth test at a higher test current (20 Amps) and the actual test results are displayed numerically, which means a good user can determine if something is just passing or just failing.
There are many of these still scattered around NZ and some in Australia so considering there age they have proven to be a reliable basic safety testing Pat that represented good value for money at the time.

We will conclude with the normal big 3 questions.

Q Does it enable the testing person to comply with ASNZS 3760
A In some circumstances ie if earth testing and 500volt Insulation resistance tests only need to be done.

Q Value for money? Probably a little irrelevant now a better question might be should I buy a second-hand one of these and at what price?
This we can answer easily if it’s given to you greatly – but we wouldn’t buy one, they are old and no parts are available anymore, they are also not easy to perform calibration adjustments and it’s highly likely it’s out of calibration.

Well thats it for the first of the out of production and or old Pat’s review, we have a few to follow so keep an eye out.