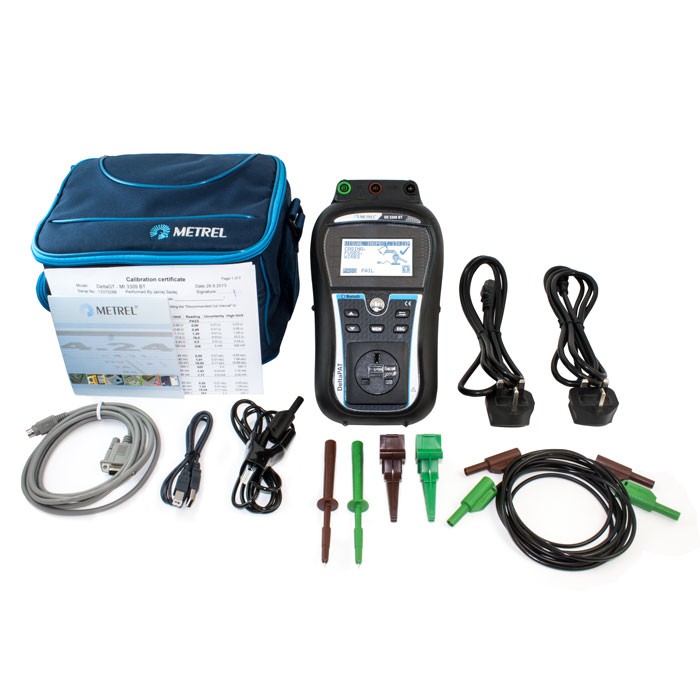 This is going to be an interesting review on a very popular handheld PAT. As the other reviews I’ve read on this are all from those selling the DeltaPAT, we’ll examine the good and the bad and see what happens.

The unit is supplied in a soft case with all the standard accessories, though it must be removed from this case when in use. This could have been designed better as once it is removed it no longer has any protection.

It is a semi advanced PAT with built in memory and that can be battery powered for some tests, as well as being able to use a printer and scanner.

When used as a basic tester i.e. the user doesn’t want to keep records then this is a very quick PAT, test results are obvious and clear, a green or red light is pretty hard to miss! and that is on top of a tick or cross and actual test value where appropriate, so I think the PAT does very well with making a pass or fail clear to the user.

Unfortunately, if used with a printer then this isn’t the case. A pass or failed tag if folded around a lead is only clear if you can see both sides of it!?

The user can operate the tester in simple test mode as well as an Autotest mode, designed to make tests somewhat auditable. This feature of 3-digit codes, starting with a 1 for class 1 items and 2 for class 2, works very well if consistency and auditability are important to the users.

(These same codes are also used by another PAT brand as there is some shared DNA in their history, they have incidentally further enhanced the coding system -we will no doubt be reviewing that brand in the future). That aside, the Delta can also be used in single test mode though it will not normally be used in this mode.

Controls for the most part work very well, except if you are trying to use the scrolling method to enter data or select a test code. In that case you probably won’t have any further use for a hair dresser, in simple words it’s just Nasty!

The unit has multiple test sockets which have no unique physical fitting to prevent the wrong lead being plugged in, making it easy for a user to plug the wrong lead into the wrong socket. This is ok if it’s an earth test is being performed as the item would just fail but if someone is testing class 2 items for leakage or insulation resistance then something unsafe could easily pass, which is potentially very dangerous. We have seen this happen so if you use or intend on purchasing one of these PATs then make sure you are confident on where the correct leads plug in.

The unit charges while in use so that it has no need for a separate charger – which is the sensible option, so no worries on that front.

Let’s now look at the actual main tests it performs starting with the test for earthing. Sadly this is disappointing, the earth bond test can only be done at 200 milliamps i.e. 0.2 Amp but there’s not much point in doing this test at 200 milliamps as all you really know if it’s a pass is that the protective earth has continuity and that it’s resistance is less than 1 ohm.

In a nut shell it tells you the item being tested is compliant with ASNZS3760 but won’t still tell you how good the earth is; or in other words will the protective earth protect you if it needs too!

The Metrel Gamma and Delta Pats are the only ones Metrel now make that won’t do at least a 10 Amp earth bond test, that must say something we think!

Next on our list is the insulation resistance test, the user can select either a 250 volt or 500-volt test as appropriate and this works very well.

Now we look at the leakage test this needs as is to be expected that the mains power is connected to the PAT ie you cannot do this test via batteries, a requirement for this test under ASNZS3760 is that the item must be tested at normal operating voltage.

As the leakage test is effectively putting the appliance being tested into “Go mode” we think the PAT lacks a major safety feature here as there is very little warning to the user that the appliance is going to actually go!

This is ok if you are testing a computer or lamp or an appliance without moving parts but not so safe if you’re testing a saw or grinder.

All that said, the leakage test functions fine, just be careful when doing it or alternatively keep plasters and some spare fingers handy.

Polarity testing for leads and power boards is next on our list, this works very well and is quick. You can also do multiple tests here for earthing without having to do additional non necessary repeat tests so leads and power boards are easily tested for all functions. This includes polarity but with one exception, that being PRCD’s. If you’ve got an inline Portable RCD then you’ll have problems, big ones, which we will explain below.

The testing of PRCD’s works well unless you are using any PRCD test codes ie 180, 182 or 184 from the “Shortcut menu”; in which case you won’t actually be able to do the RCD testing, as before when an RCD is tested a polarity test is performed and at this point you will always get a fail! (this is due to the PAT not providing enough power to the PRCD to energize it when carrying out the polarity check).

A feature that surprisingly is missing is that of an increasing current test, often referred to as a ramp test. This tests the PRCD’s actual trip current and whilst it is a non-required test, its very worthwhile for those who want to find nuisance tripping PRCD’s (ones that are too sensitive and disconnect the power to soon).

These are often sold because they are small and then ironically are often packaged in a basic imitation pelican style case fitted with a printer, battery and all necessary leads, power supplies and chargers. This effectively makes a small handheld PAT now a large and heavy one (sometimes weighing up to 12Kg).

As often is the case various software and accessories can enhance the PAT to turn it into a system rather than a standalone PAT and that’s the same with this one.

To summarise let’s look at the 3 big questions:

A: No, if you are going to be testing inline PRCDs we would suggest looking elsewhere, as the PRCD could be rewired then a polarity check would need to be carried out.

Yes, if you have no intention of ever testing a PRCD that has or could have been rewired/wired incorrectly.

Q: Is it a safety tester or a compliance tester only?

If this unit was not so heavy when supplied in the carry case with a printer and could carry out the polarity testing, then this could be an extremely good tester.