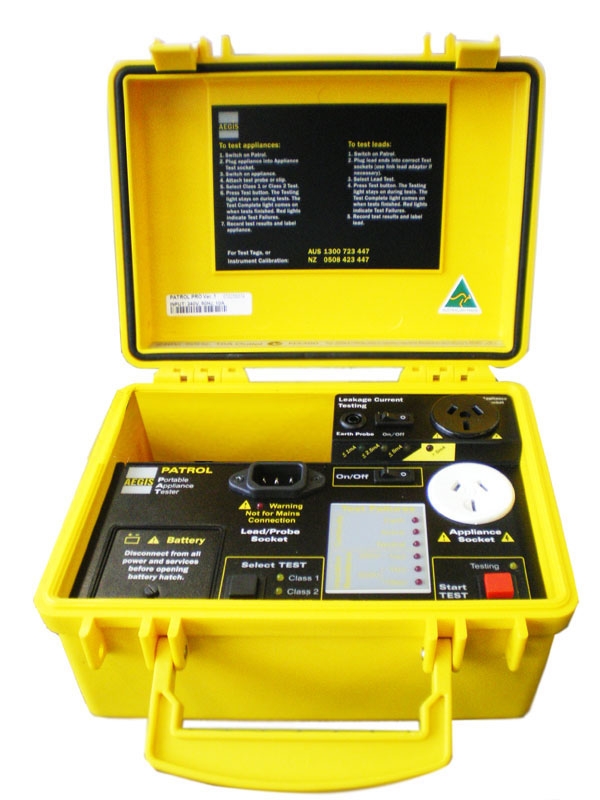 Both these PATs are available for little more than $1,000, so the price is nice but let’s see what you get for your money! First of all it comes in a great Pelican style case and is small and lightweight.

Operationally it’s very very simple to use, a pass or fail is displayed very clearly with either a series of red or green lights appropriate to the test being performed and then an overall result is displayed again either green or red.

There is no way of knowing however if something has just passed or just failed; if an LCD display showed the value as well then this would be highly advantageous to a lot of users and I’m sure this would significantly increase costs and most likely size.

The first test being claimed by the manufacturer is an earth bond test however this may be misleading as it can only test an earth at 0.2 Amp (200milliamps) normally an earth bond test is a high current test such as 10 or 25 Amps, a test done at 0.2 Amp would be considered a continuity test only and proves only that the item under test has an earth – not how good it is!

Though it is totally acceptable to do the above test at a low current in accordance with ASNZS 3760, it won’t prove the safety of the earth, which we would hope is why people are doing the test in the first place!

This works well and as expected.

The alternative test to the Insulation Resistance test is the leakage test at normal operating voltage. For all practical purposes this should be a requirement on any PAT tester sold in Australia or NZ as so many items are now required to have this test performed, however only the Patrol Pro can do this test, the standard Patrol cannot.

Buyer beware, do your homework first.

The last standard test is the Polarity test which is required on leads and power boards. This works well though there is no provision for doing just multiple earth tests on power boards, which is commonly done.

In the above case an insulation test and polarity test will need to be done on all sockets even though it wouldn’t normally be necessary once the first had passed the tests.

PRCD testing has become a common requirement under ASNZS3760 however the Patrol doesn’t have this ability in any version, which is quite limiting to the user.

Additionally, there is no memory, so any records will need to be kept manually. Effectively this makes for a quick tester (well what can be a very quick tester) very slow when lots of testing is being done and records kept.

In a nut shell it’s a bottom-end tester in a good case. The likely purchasers will be those that aren’t really concerned about safety, who don’t understand or who may of been conned by some clever sales person.

Q: Is it a safety tester or compliance tester only?

If you are going to consider this tester it is worth spending extra to get the Patrol Pro so that you can carry out a leakage test, however you will still be stuck with a lack of data and no tested PRCDs.

As always the above is only the opinion of portable appliance tester reviews and while every effort has been taken to ensure accuracy, we accept no responsibility for errors or commissions.